What Is A Celestial Chart? 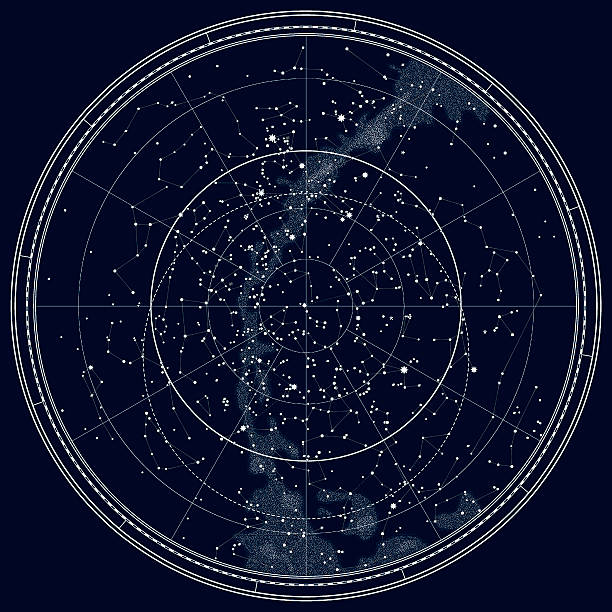 Star charts and how to utilize them are covered in this article.

As a visual representation of the night sky's mysteries, star charts have a distinct but enigmatic appearance. Modern computer-generated charts are an improvement on centuries-old hand-painted maps that depicted landscapes and people.

When and how to utilize a star map

Every month's star chart from a publication like National Geographic or a historical society will look somewhat like this: a circular region with dots indicating the constellations. Stars that are directly overhead are shown in the middle of the chart. As you can see, it's labeled with the compass points for north and south as well as for east and west on its outside rim.

Overhead, pointing north, is the best way to match the sky to your chart. Also, the chart must be specific to the month you're now in. An explanation of what time of night the chart best fits is generally included, such as "late in the evening at the beginning of month" or "early evening at month's end."

In addition, there are planispheres, or star-finder wheels, that may be set to any date and time. A big full-circle chart sits behind an oval-shaped cover on these two-layered gadgets. When you look through the window, you only see the stars that are visible at a specific moment and date in relation to the backdrop chart. In order to align the current date and time on the backdrop chart, you must rotate it around a pivot. This is what you may expect to see as darkness falls.

Charting the stars: the essential components

What ever the format, there are several options for celestial chart designers.

Should the backdrop be black or white? A black or dark blue backdrop with white dots for stars appears more authentic. It's simpler to print on a white backdrop with black dots for the stars, which allows the user to add in their own remarks.

Do you want lines or don't you want lines? Stars can be linked together by guide lines to form forms that guide the viewer's gaze from one star to the next. Traditional and widely used forms include the Great Square of Pegasus, the three stars of Orion's Belt, and others. It's okay if you come up with your own stick figures if that's what helps you get where you're going.

Is it better to have constellation figures or no constellation figures? A merry band of legendary characters, ranging from Andromeda to Vulpecula, swims through the sky on certain celestial charts, notably those from the 1600s to the early 1800s, such as those seen in art books or as vintage ornamental objects. However, many of them remain a mystery to this day. If, for example, you look at the pattern of Orion's two shoulders and three belts, it's easy to visualize the shape of his body. It can be tedious, though, to attempt to construct Ursa Major, the Greater Bear, from the Big Dipper and its surrounding stars.

According to a classic 1842 astronomy book, "The Sidereal Heaven and Other Subjects Connected with Astronomy," mythical constellation depictions are "grotesque and discordant images... nasty, stupid and fictitious beings." Since the International Astronomical Union (IAU) decided on constellation borders in 1930, star charts have mostly eliminated mythical images in favor of stick figures or straight lines.

What do you think? When viewed from Earth, Mercury, Venus, Mars, Jupiter, and Saturn resemble brilliant stars. The zodiac is a belt of stars that stretches from north to south and from east to west. Star charts may depict the positions of the planets for a given month in a given year if they are produced for that month.

Celestial cartographers can lessen distortion by drawing portions of the sky on a piece of paper. Since 1910, Norton's Star Atlas has split the sky into gores, like segments of an orange, with each gore covering around one-fifth of the sky with minor distortion. Professional astronomers use star atlases with large charts that zoom in on even smaller parts of the sky.

In navigation, star charts are used

Professional navigators aboard ships utilize star charts as well. Traditional celestial navigation can be used in the absence of GPS satellites provided a qualified navigator or quartermaster has access to a chart that lists 58 brilliant navigational stars. After determining the direction and height above the horizon of a star, the navigator will use this information to perform a computation to determine the ship's longitude and latitude.

Charts indicating brilliant navigational stars were kept by astronauts on the Apollo moon missions, so they could use them to fine-tune the spacecraft's attitude-control system. Star-gazing techniques were explored in 2018 as a backup option for future flights by astronauts on the International Space Station.

The stars will always be there for those who know how to use them, even if high-tech systems fail.