In the coming years, some truly awesome next-generation telescopes are going to be gathering their first light. Between space telescopes like James Webb and Nancy Grace Roman, and ground-based telescopes like the Extremely Large Telescope (ELT) and the Giant Magellan Telescope (GMT), astronomers will be able to study aspects of the Universe that were previously inaccessible.

For instance, there are Population III stars, which are the first stars to have formed in the Universe. These stars are not observable in visible light and even next-generation facilities (like those mentioned above) will not be able to see them. But according to a team led by NASA Hubble Fellow Anna Schauer, the solution could be to build what she has named the “Ultimately Large Telescope” (ULT) on the Moon.

This idea, which was shelved by NASA a decade ago, was put forth by Schauer and her colleagues from the University of Texas at Austin in a recent paper due to be published in an upcoming issue of The Astrophysical Journal. It calls for a liquid-mirror telescope measuring 100 m (~330 ft) in diameter and powered by a solar array that would operate autonomously on the lunar surface, relaying data to a satellite in orbit.

Professor Volker Bromm, a theorist from UT Austin and co-author on the paper, has been studying the first stars to form in our Universe for decades. As he explained in a recent news release from the McDonald Observatory (which is overseen by UT Austin):

“Throughout the history of astronomy, telescopes have become more powerful, allowing us to probe sources from successively earlier cosmic times — ever closer to the Big Bang. The upcoming James Webb Space Telescope (JWST) will reach the time when galaxies first formed.”

“But theory predicts that there was an even earlier time, when galaxies did not yet exist, but where individual stars first formed — the elusive Population III stars. This moment of ‘very first light’ is beyond the capabilities even of the powerful JWST, and instead needs an ‘ultimate’ telescope.”

The current scientific consensus is that the Population III stars formed a few hundred million years after the Big Bang (over 13 billion years ago). These stars were unlike those that exist today, composed of hydrogen and helium and comparatively short-lived (a few million years). Within the cores of these giant stars, heavier elements were formed and became part of their outer layers which were then blown off when these stars died. Artist’s rendering of a Starship taking off from a lunar base. Credit: SpaceX

This process allowed for the creation of heavy metals and silicates, which would allow for the formation of the planets. It also meant that all subsequent generations of stars had higher metal contents (aka. metallicity), which astronomers use to determine stellar ages. By studying Population III stars, astronomers would reveal a great deal about the evolution of our Universe.

Unfortunately, these stars formed during what is known as the cosmic “Dark Ages,” when the Universe was filled with clouds of gas that obscured visible and infrared light. This makes Population III stars invisible in all but parts of the near-infrared and radio spectrum that are currently inaccessible to even our most advanced instruments.

Luckily, calculations performed by Schauer and her colleauges show that a liquid mirror telescope operating from the surface of the Moon would be capable of studying these stars. The concept, originally known as the Lunar Liquid-Mirror Telescope (LLMT), was first proposed in 2008 by a team led by Roger Angel – the Regents’ Professor of Astronomy and Optical Sciences at The University of Arizona.

After reviewing this proposal shortly thereafter, NASA chose not to pursue the project. According to Niv Drory, a senior research scientist at the McDonald Observatory and a co-author on the paper, the supporting science on the earliest stars did not exist at that point. However, subsequent research into Population III stars and NASA’s plans for returning to the Moon (Project Artemis) make this proposal feasible once again. 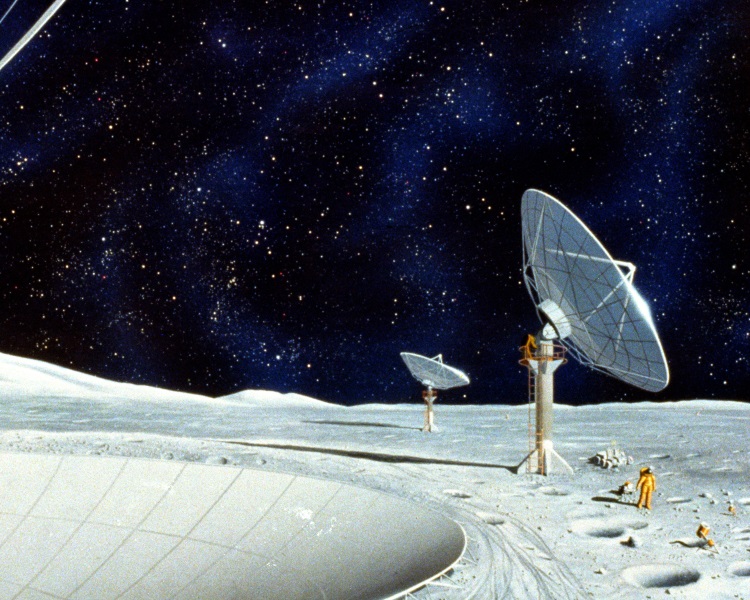 Artist’s concept of astronomy being conducted on the surface of the Moon. Credit: NASA

Similar to the LLMT, the ULT would rely on liquids rather than coated glass (making it much cheaper to transport to the Moon. One type of liquid would be arranged in a spinning vat while a second metallic liquid (like mercury, which is reflective) would be positioned on top. The vat would spin continuously to keep the surface of the liquid in the correct parabolic shape to work as a mirror.

Similar to what NASA, the ESA, China, and other space agencies are planning – building a lunar base in the South Pole-Aitken Basin – the telescope would be stationed at the Moon’s polar regions (north or south). Within one of the many permanently-shadowed craters in these regions, the ULT would be free of radio or atmospheric interference.

On top of that, it would be able to stare at the same patch of sky continuously and collect as much light in the near-infrared spectrum as possible. As Bromm summarized:

“We live in a universe of stars. It is a key question how star formation got going early in cosmic history. The emergence of the first stars marks a crucial transition in the history of the universe, when the primordial conditions set by the Big Bang gave way to an ever-increasing cosmic complexity, eventually bringing life to planets, life, and intelligent beings like us.

“This moment of first light lies beyond the capabilities of current or near-future telescopes. It is therefore important to think about the ‘ultimate’ telescope, one that is capable of directly observing those elusive first stars at the edge of time.“ In this illustration, an astronaut carefully climbs down the ladder and carefully places her foot on the Moon. Image Credit: NASA

The Ultimate Light Telescope is one of many proposals for a lunar observatory. For instance, multiple recommendations have been made for radio observatories to be stationed on the far side of the Moon. The lack of interference from terrestrial sources would not only be ideal for observing the unseen parts of the cosmos, but also in the Search for Extraterrestrial Intelligence.

In addition, Dr. Karan Jani and Prof. Abraham Loeb – of the Laser Interferometer Gravitational Observatory (LIGO) and the Harvard-Smithsonian Center for Astrophysics (CfA), respectively – recently proposed that the Moon would also be an ideal place for a Gravitational-wave Lunar Observatory for Cosmology (GLOC).

NASA also has plans to send a small satellite called the Dark Age Polarimetry Pathfinder (DAPPER) to lunar orbit in the coming years. This joint project between UC Boulder and the National Radio Astronomy Observatory (NRAO) will build on previous work by the Wilkinson Microwave Anisotropy Probe (WMAP) to explore the early Universe.

These and other proposals will have their chance to be implemented in the coming years. Beyond returning astronauts to the Moon by 2024, the long-term aim of Project Artemis is to establish a program of “sustainable lunar exploration.” Once this infrastructure is in place, permanent facilities can be built that will help advance the science of space exploration!