The discovery of phosphine in Venus’ atmosphere has generated a lot of interest. It has the potential to be a biosignature, though since the discovery, some researchers have thrown cold water on that idea.

But it looks, at least, like the discovery is real, and that one of NASA’s Pioneer spacecraft detected the elusive gas back in 1978. And though it’s not necessarily a biosignature, the authors of a new study think that we need to rethink the chemistry of Venus’ atmosphere.

The recent study found only tiny amounts of phosphine in Venus’ atmosphere: 20 parts per billion. But it was still there. And it looks like it’s been there for a while, according to the results in a new paper.

A team of researchers announced the Pioneer phosphine data in a paper titled “Is Phosphine in the Mass Spectra from Venus’ Clouds?” The lead author is Rakesh Mogul, a Professor of Biological Chemistry at California State Polytechnic University. Mogul is also associated with the SETI Institute, and NASA’s Office of Planetary Protection. The paper is available on the pre-press site arxiv.org.

“Considering the implications of the reported single spectral line detection of phosphine (PH3) by Greaves et al., we were inspired to re-examine data obtained from the Pioneer-Venus Large Probe Neutral Mass Spectrometer (LNMS) to search for evidence of phosphorus compounds,” the researchers write in the beginning of their paper.

The first involved a series of spacecraft launched between 1958 to 1960. It sent spacecraft to orbit the Moon, to fly-by the Moon, and to investigate the interplanetary space between Venus and Earth.

It’s the Pioneer Venus Multiprobe (PVM) and the data it gathered that’s at the heart of this study. The PVM was made up of a main spacecraft that carried four separate probes. One was large, and three were smaller. On December 9th, 1978, all four probes were released into the Venusian atmosphere at different locations, gathering data as they descended through the thick clouds. The largest of the four probes is simply referred to as the Large Probe. It carried more instruments than the smaller probes; seven, in fact. And it lowered itself via parachute, while the other three didn’t. One of its instruments was the Large Probe Neutral Mass Spectrometer

After going over the data, the team wrote, “We find that LMNS data support the presence of phosphine; although, the origins of phosphine remain unknown.” It took some work to get to that conclusion. After all, the data is over 40 years old.

They starting by testing the accuracy of the data, and the instrument that gathered it, to make sure. “To estimate the resolution and resolving power of the LNMS, we first compared measured and expected masses for CO2, SO2, N2, 40Ar, and 36Ar, which were identified by Hoffman et al,” they write. “In all cases, measured masses (from the spectra) and expected masses differed by <0.003 amu

“In this light, we leveraged the high-resolution data and dynamic range to uncover the presence of phosphine. We note that phosphorous compounds were not reported in the initial analyses…” of LNMS data. But that doesn’t mean the signal wasn’t there.

The authors say that the data confirms the presence of phosphine in Venus’ atmosphere. They also list a few other conclusions, which only the especially chemically-minded might find interesting. Interested readers can check out the paper, which is a fairly short read.

In short, there’s some initial ambiguity in the readings, suggesting that what appears to be PH3 could potentially be H2S, or hydrogen sulfide. But in the end, it’s PH3 and its sibling PH2 that account for it, in the authors’ analysis. 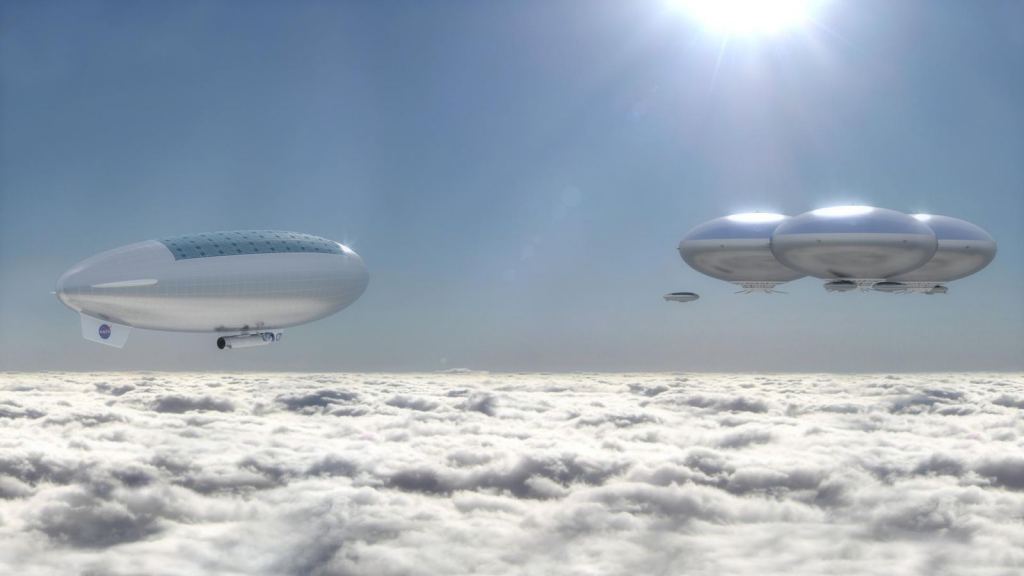 Balloon Missions to Venus have been proposed for both exploration as well as colonization. Image Credit: NASA

They also found some other incongruential data for other chemicals in Venus’ atmosphere. Again, this is likely of interest to only the chemically-minded among us, but it’s worth mentioning. They say the presence of these chemicals is at odds with Venus’ oxidizing atmosphere. These include methanes, nitrous oxide, and hydrogen peroxide.

In their conclusion, the authors write that “this re-evaluation of Venus’ mass spectra shows the detection of atomic phosphorous as a fragmentation product from a neutral gas. Moreover, the spectra show a tantalizing possibility for the presence of PH3, along with its associated fragments…”

They also point out that the LNMS signal for phosphine is weak, but it matches with the 20 ppb figure in the study from a couple weeks ago.

“While intensities of the peaks are low, they are perhaps consistent with
the ~20 ppb abundances reported by Greaves et al. Together, the tentative assignments suggest that the reported abundances of H2S (from mass spectra) across Venus’ atmosphere may actually be PH3;” This figure from the study shows tentative assignments of different chemicals to the spectra obtained by the Neutral Mass Spectrometer on NASA’s Pioneer Venus Probe. Image Credit: Mogul et al, 2020.

In total, the team thinks that we might need to rethink Venus’ atmosphere, and its potential to harbour life. Not only because of the Greaves et al study, but because of their own results. “We believe this to be an indication of chemistries not yet discovered, and/or chemistries potentially favorable for life.”

“Looking ahead,” they write, “and to better understand the potential for disequilibria in the clouds, we require a sustained approach for the exploration of Venus.”

Erupting volcano on Indonesia’s Java island – Watts Up With That?

Mike’s Baseline Trick? Don’t panic – a brand new baseline for international temperature could cool future debate – Watts Up With That?

Area Launch System Performs a Dramatic Sizzling Fireplace Check, Blasting With all Four Engines at As soon as

What World Warming? 148 New (2020) Scientific Papers Affirm Latest Non-Warming, A Levels-Hotter Previous – Watts Up With That?

The Ocean Warming Enigma – Watts Up With That?

Researchers Rewind the Clock to Calculate Age and Web site of...