Facebook An updated version of the Messenger Kids app is launched today, with the aim of making it easier for kids to interact with friends and family, navigating the app, and personalizing their experience with features like custom chat bubble colors. The redesign also gives the child-friendly app an appearance that is more like Messenger even.

The updated app eliminates the larger, colorful blocks that would blink when messages came in for a more traditional messaging app design that has chats stacked in a vertical list. The kid's unread messages, now at the top of the inbox, are in bold with a blue dot to catch the eye. Media and news previews have also been added to make it easier for kids to see updates on their conversations.

And with a new swipe gesture, children can start a call from their inbox.

Finally, the update introduces a new option to personalize conversations, including one-on-one and group chats, with a custom chat bubble color.

Facebook calls the update a "test", but the changes here aren't small changes to layout, navigation, or functionality – they're a rework. That makes it less likely that this is just an experiment that will later be rolled back based on user feedback. By calling it a test, Facebook is giving itself more time before committing to a global rollout.

The company says the new features will be available for the first time to children with iPhones in the US and Canada. The update will be rolled out to other devices and markets later in the coming months.

The changes come shortly after Messenger itself received a significant update of its own that includes a visual makeover and new features, including support for chat topics, custom reactions, selfie stickers and disappearance mode, and support for cross-app communication with Instagram User. These updates could also have led to the overhaul of Messenger Kids as there is likely an underlying messaging infrastructure in place.

The Messenger Kids app has been updated continuously over the years since it was launched. Finally, it was explained in detail what Facebook does with all the data it collects. 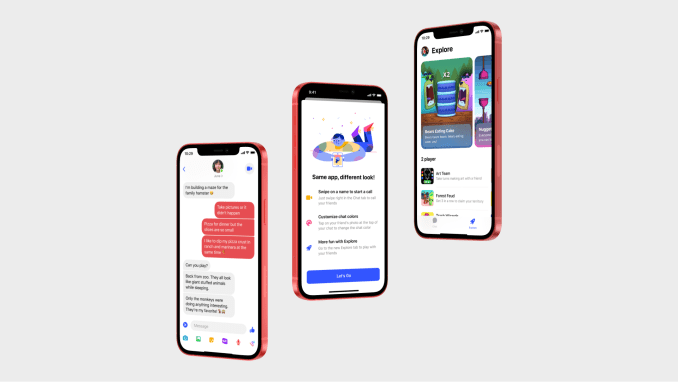 Parents should be aware that today this app collects a lot of personal information, including names, profile photos, demographic details (gender and birthday), a child's connection to parents, contact information (such as most frequent contacts), information about the app Usage and device attributes and unique identifiers, data from device settings (such as time zones or access to cameras and photos), network information and information from error reports or feedback / contact forms. While some of these allow the app to function properly, some parents are also concerned about how this data is actually used.

While the app offers a range of parental controls to make it easier for parents to monitor and restrict how and when their children chat online, Messenger Kids' privacy policy still leaves a lot of leeway on how the data can be used to “rate, fix "Improving, creating and developing our products" and passing it on to other Facebook companies. Parents should carefully weigh the risk of their child being allowed to use a Facebook product in order to use an app with robust parental controls.