Hulu is under fire for promoting a new docuseries about Breonna Taylor on the same day that it was revealed that the police officers responsible for her death would not be directly charged for the fatal shooting.

On Wednesday, the streaming service started the promotion of the FX docuseries titled, The New York Times Presents: The Killing of Breonna Taylor. Critics say HULU was being blatantly insensitive by promoting the series on the same day, causing the Disney-owned company to withdraw the promotion and offer an apology, according to The New York Daily News.

Earlier today, we promoted content that we felt would be meaningful in light of today’s events. That was, quite simply, the wrong call. We’ve taken the posts down and are deeply sorry. Thank you for holding us accountable – we will learn from this.

The original now-deleted post with the trailer, read: “Breonna Taylor’s life was changing. Then the police came to her door,” the tweet read. “#NYTPresents: The Killings of Breonna Taylor traces the missteps of the deadly raid. #FXonHulu.” 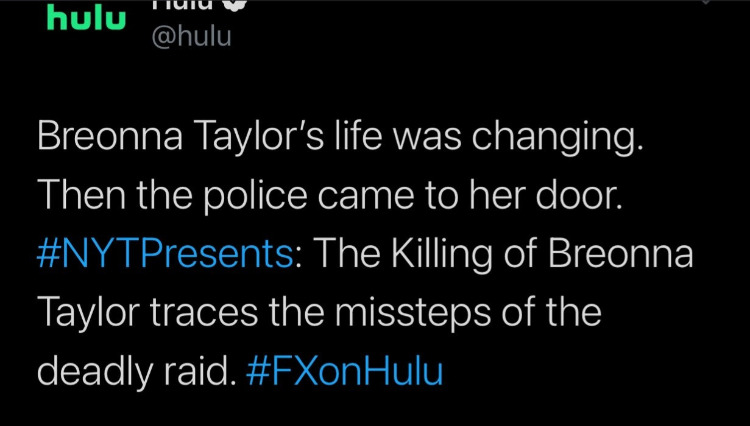 One particular Twitter user was disgusted by the promotion.

Y’all took ADVANTAGE of her name trending and HER STORY for YOUR RATINGS!!! If y’all wanted to do something meaningful you would have said JUSTICE FOR BREONNA TAYLOR. Is her family even involved in this “documentary” or did y’all do this to hop on the “we care” trend?!?! pic.twitter.com/SYK0EO6aTI

Yet, another gave a different perspective.

I get the criticisms re: this promo, but also want y’all to know the doc shines a light on the facts of the incident & subsequent misrepresentation by the cops in the press to cover up their mistakes. Feels like it could help sway even more people to demand justice and reform.

Former Louisville police officer Brett Hankison was indicted on three counts of wanton endangerment in the first degree, defined as exhibiting extreme indifference to human life for firing shots into a neighboring apartment.

You Can Now Schedule Your Google Messages to Be Sent Whenever You Want. Here’s How.