We can thank NASA's New Horizons spacecraft for opening our eyes to the complexity of Pluto. On July 14, 2015, the spacecraft was within a 12,500 km radius of the dwarf planet. During the flyby, New Horizons was able to characterize Pluto's atmosphere and its surface.

New Horizons saw, among other things, a region with snow-capped mountains.

Why is there frost?

This area lies south of Pluto's dark equatorial band, informally named Cthulhu Regio, and southwest of the vast nitrogen ice plain, informally named Sputnik Planitia. North is at the top; In the western part of the picture a chain of light mountains extends north to Cthulhu Regio. New Horizons' compositional data show that the bright snowcap material covering these mountains is not water, but atmospheric methane that has condensed as frost on these surfaces at high altitudes. Photo credit: NASA / Johns Hopkins University Applied Physics Laboratory / Southwest Research Institute.

A team of researchers led by members of the CNRS (Center National de la Recherche Scientifique or French National Center for Scientific Research) addressed the issue in a new study. The title reads: "The equatorial mountains on Pluto are covered in methane frosts resulting from a unique atmospheric process." The lead author is Tanguy Bertand, who is currently a NASA postdoctoral fellow at the NASA Ames Research Center. The study is published in Nature Communications.

New Horizons found snow on Pigafetta Montes and Elcano Montes in Pluto's Cthulhu Macula region on the planet's equator. Pluto's snow is not like the snow of the earth. It's frozen methane, not frozen water. But Pluto is a cold world with a delicate atmosphere, and there is hardly any methane in its very thin atmosphere. How did it form as snow on the mountain tops? Pluto's surface exhibits a remarkable range of landforms, each with its own color, and telling a complex geological and climatological story. Photo credits: Courtesy of NASA / JHUAPL / SwRI Table of Contents Page 2015 Annual Report Department: (15)

On earth, temperature decreases with altitude due to adiabatic cooling. When the air moves up the slope of a mountain, it expands, causing a cooling. The opposite is the case when the air falls: the air becomes warmer. When humid air rises and when it cools sufficiently, it condenses and falls as snow. It's a well-known phenomenon here on Earth, but it cannot explain Pluto's snow. On earth, the temperature decreases with altitude by about 1 degree Celsius every 100 meters. It is warmer on Pluto at higher altitudes. However, on Pluto there is still methane frost or snow at high altitudes. Photo credit: Tanguy Bertand et al. 2020.

The team used a climate model to find out how the methane snow fell on the mountains. Pluto's thin atmosphere is mostly nitrogen with traces of methane and carbon monoxide. With only traces of methane, it's difficult to explain all of the snow.

Since Pluto does not have a thick, insulating atmosphere like Earth, the dwarf planet is warmer at higher altitudes due to solar radiation as the heat is absorbed by the methane in the atmosphere. This applies to the first few kilometers at altitude. This process of heat absorption by methane does not take place in areas where nitrogen is on the surface, as it can sublime and cool the first few kilometers in the atmosphere.

A) New Horizons map of the southeastern Cthulhu region on Pluto in the equatorial regions west of Sputnik Planitia. The yellow box shows the boundaries of the area detailed in (b). B) Detail of the CH4 frost-covered ridges of Pigafetta and Elcano Montes in Cthulhu Macula (148.2 ° E, 10.1 ° S), seen in an enhanced Ralph / MVIC color image (680 µm / pixel, cylindrical projection ). C) Satellite view of mountain ranges covered with water ice in the Alps.

Pluto's atmosphere is too thin to warm the planet's surface. So if there is no frozen nitrogen on the surface, there is a "local radiation equilibrium". This equilibrium is independent of altitude and colder than the atmosphere above.

As a result, the near-surface air is cooled, becomes denser and wants to flow downwards constantly. Climate simulations by other researchers show that this mechanism is present throughout Pluto and at any time of the day. The result is that Pluto is dominated by gradients. That is why snow formation is so puzzling. It is completely different to the earth, where the air cools as it ascends and its moisture deposits as snow on the mountains.

"It is remarkable that two phenomena and two materials that are so different can create the same landscape when viewed with similar resolution."

The research team found that Pluto's atmosphere circulates in such a way that methane is concentrated at higher altitudes. This circulation is seasonal and is driven by sublimation on the surface. The authors refer to this as "sublimation-induced circulation cells". When the methane becomes more concentrated, it reaches a saturation point and falls as snow on the surface of the mountains. 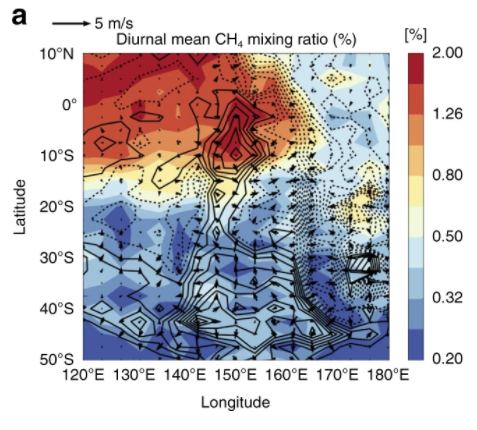 This is an image from the simulation the team ran in their study. It shows the daily mean mixing ratio of methane. The black lines represent surface winds concentrating the methane. As the bar on the right shows, red stands for higher methane concentrations at higher altitudes and forms as frost in the mountains. Photo credit: Bertand et al., 2020.

There is also a feedback loop. When methane snow forms in the mountains, the albedo increases, which leads to more cooling. With more cooling, there is more methane snow.

These images from the study show accumulations of methane snow in the area highlighted in yellow in the previous image. Brown is a fleeting surface, and gray is the frozen nitrogen ice sheet in Sputnik Planitia. From blue to white there is an increasing accumulation of methane ice. The picture on the right is the same simulation, but with an increasing albedo effect. The images come from a climate simulation that the researchers carried out. Contour lines are 300m. Photo credit: Bertand et al., 2020.

"Overall, the formation of CH4 frost on the Pluto Mountains seems to be driven by a process that, according to our model, is completely different from the process that forms snow-capped mountains on Earth," the team wrote at the end of their paper. "It is remarkable that two phenomena and two materials that are so different can create the same landscape when viewed with similar resolution."

This is just another example of the complexity of Pluto. Before New Horizons' flyby of the dwarf planet, we had no idea that the surface, atmosphere, and climate were so complex. Scientists are still working with all the data from the mission. So who knows what's still waiting to be discovered? After its closest approach to Pluto, New Horizons looked back at the planet and captured that almost sunset view of its rugged, icy mountains and flat ice plains. The smooth surface of Sputnik Planitia (right) is flanked in the west (left) by rugged mountains that are up to 3,500 m high. Some want to send another mission to Pluto, this time an orbiter. Photo credit: NASA / JHUAPL / SwRI

There is also talk of another mission. New Horizons only performed one ice dwarf flyby, so its best data is confined to one side of the distant world. Planetary scientist Alan Stern was the principal investigator for the New Horizons mission and he believes an orbiter mission to Pluto is the next step. A lander could also be part of this mission.