Finding planets out in the Universe is pretty hard. I say this despite the fact that two planets in Earth’s skies are aligning tomorrow to form one of the brightest objects seen in hundreds of years. But while the brilliant Jupiter and Saturn are always visible to the naked eye, Neptune wasn’t directly observed until 1846 despite being in our own solar system. We didn’t start discovering planets outside the solar system until 150 years after Neptune. Like Neptune, we find them (though indirectly), through visible light. However an international team of researchers may have just made the first detection of an exoplanet through radio emissions created by the planet’s aurora.

A simulation of Gas giant “Hot Jupiter” Tau Boötis Ab which orbits its parent star at one seventh the distance Mercury orbits our Sun. It’s atmosphere and the corona of its star are possibly touching eachother. – c SpaceEngine Pro by Author

Led by Cornell postdoc researcher Jake D. Turner, Philippe Zakara of the Observatoire de Paris, and Jean-Mathias Greissmeier of the Université d’Orléans the team has a forthcoming article in Astronomy & Astrophysics based on the theorized detection of exoauroa. Using the Netherland-based LOFAR (LOw Frequency ARray) Low Band Antenna, radio emission data was captured from three solar systems: 55 Cancri, Upsilon Andromedae, and Tau Boötis. Each of these systems contains known exoplanets. The research wasn’t to discover new exoplanets but test whether the known planets in these systems could be detected by looking for the radio signals. Planets emit radio signals created from interactions between their magnetic fields and the plasma or “solar wind” radiating from their parent stars. When plasma from a star becomes entangled in the magnetic bubble around a planet – the magnetosphere – visible aurora is created just like the Northern/Southern Lights we see on our own planet. Aurora also creates radio emissions that travel light years through space. The LOFAR Observatory is an array made from 20,000 individual radio antenna concentrated in 48 separate clusters within the entire array. c LOFAR / ASTRON CC by 3.0

Currently, we only have a handful of methods to detect distant worlds outside our own solar system. The two most successful are doppler spectroscopy (or the radial velocity method), and the transit method. You’re familiar with the doppler effect in sound waves. A passing ambulance siren sounds higher pitched when approaching but lower when moving away. Light waves also experience a doppler effect. When an object is approaching us, its light is shifted to a bluer part of the visible spectrum. As an object travels away from us, its light is shifted to the redder part of the spectrum. Stars with planets show both blue and red shifted light because they are literally wobbling back and forth as they are tugged on by the gravity of their orbiting planets. The wobble is measured as the “radial velocity” of the star or the speed it’s traveling toward or away from us during the course of the wobble.

The second is the transit method which is used by planet hunting missions like TESS and Kepler. These missions see the silhouettes of distant exoplanets. As these planets orbit their host stars, they block a portion of the stars’ light from our perspective casting a measurable shadow across space – a transit. The transit tells us about the size of the planet, the distance from its parent star, and the duration of its year. Using both methods, thousands of exoplanets have been discovered.

Radio emission detection adds a new possible method of exoplanet hunting. Of the three solar systems observed, star system Tau Boötis showed a promising result which the team believes could be a radio emission from a planet. Tau Boötis resides 51 light years from Earth in the constellation of Boötes. The system contains an F-class star (Tau Boötis A) about 50% larger than our own Sun and 3 times more luminous. The star has an M-class red dwarf companion (Tau Boötis B) that orbits at a distance of 220 AU; more than 7 times the distance that Neptune orbits our own Sun. The main F star has a known gas giant exoplanet called Tau Boötis Ab. Tau Boötis Ab was actually one of the earliest discovered exoplanets detected in 1996 using doppler spectroscopy.

We’ve seen aurora on gas giants closer to home as well. These composite images from the Chandra X-Ray Observatory and the Hubble Space Telescope show the hyper-energetic x-ray auroras at Jupiter. The auroras were triggered by a coronal mass ejection from the Sun that reached the planet in 2011. Image: X-ray: NASA/CXC/UCL/W.Dunn et al, Optical: NASA/STScI

There is strong evidence the radio signal from the Tau Boötis system is emanating from the planet itself. Tau Boötis Ab is a “Hot Jupiter” gas giant that orbits one seventh the distance that Mercury orbits our Sun. Its year is just 3 days long. The proximity to the star makes Tau Boötis Ab an ideal candidate for radio emission observation. Entangled so closely in the stellar plasma, the planet’s magnetic field becomes supercharged creating radio emissions a million times stronger Jupiter’s.

The planetary radio emission can be more power than the star’s emission which distinguishes one from the other. The detected signal also showed a degree of polarization expected from auroral planetary radio emission which is also distinct from other astronomical objects. However, stellar flares and outbursts can sometimes be polarized meaning the radio source could originate from Tau Boötis B, the dwarf companion star, as M dwarf stars are known for violent solar flares. As the team notes: “follow-up observations are required to confirm the presence of this faint signal, and subsequently verify its origin.” Intensity of the radio signal from one of the observations of Tau Boötis. The comparison shows the detection between “ON” beams pointed at the star system and “OFF” beams pointed away from the system used to compare and contrast a potential signal vs background noise.
c Turner, Zakara, Greissmeier et al 2020

If indeed the signal did originate from Tau Boötis Ab, we may be seeing a whole new era of exoplanet detection. It’s fitting this new era be ushered in by Tau Boötis Ab. Hot Jupiters were some of the first planets discovered by doppler spectroscopy because their mass and close orbit to their stars made the “wobble” of those parent stars more pronounced. I also have a personal affinity for this planet as the observatory where I started my science outreach career – The Trottier Observatory at Simon Fraser University – replicated the doppler observations that showed the presence of the Hot Jupiter at Tau Boötis A. 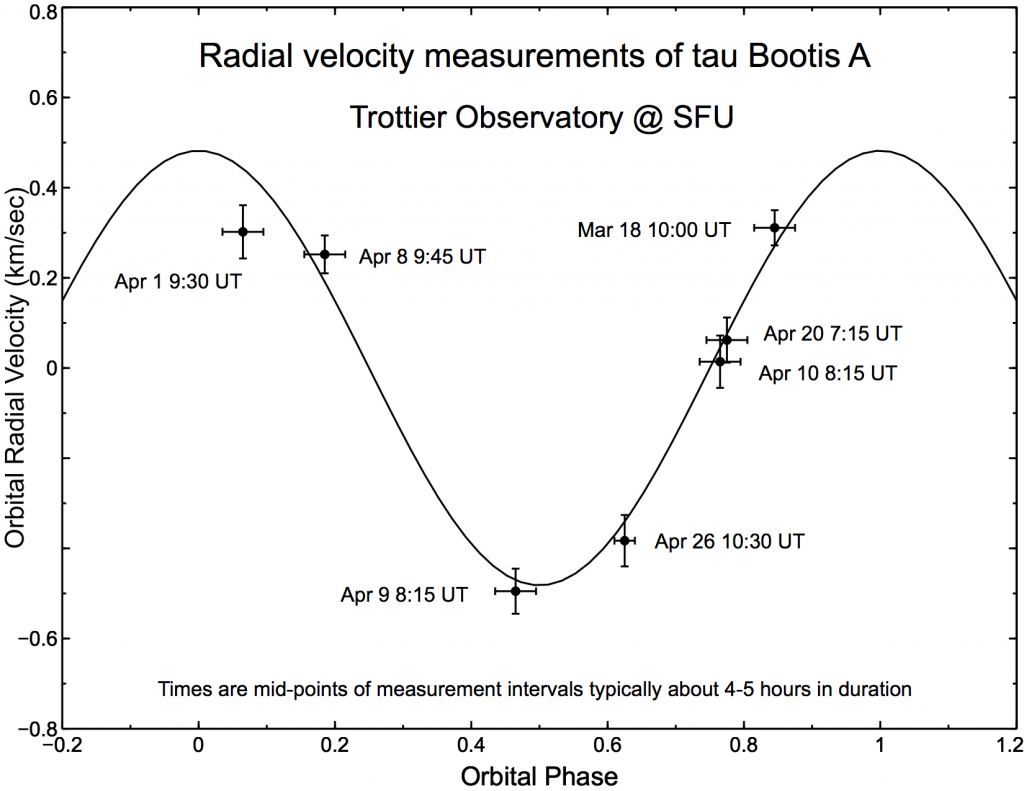 What was once the realm of professional observatories decades ago can be reproduced more widely by scopes around the world like the one at SFU. Maybe in a few decades more, smaller centres will also experience the same trickle down in technology based on LOFAR where we’re listening to the aurora of distant worlds at public outreach observatories or even at home. In addition to a new detection tool, the implication of this discovery is that we have a way to determine the strength of a distant world’s magnetosphere – relevant for habitability. Earth’s atmosphere is protected by our magnetic field which prevents solar winds from carrying our atmosphere off into space – literally blown away by the Sun – as happened to Mars’ once denser atmosphere.

In the meantime, while we’re honing new methods of finding planets way out there in the cosmos, be sure to try and catch the Jupiter/Saturn conjunction here in our own solar system on Dec 21st. Universe Today is hosting a Virtual Star party to (hopefully) stream a clear view from somewhere on the planet that we can then experience vicariously given our weather here in the Pacific Northwest. You can connect to the Virtual Star party using the link below. (Start time is still being finalized. Check the stream link for updates).

LOFAR – ASTRON – The observatory used for the discovery