Most massive planet in the solar system – twice that of all the other planets combined. This giant world formed from the same cloud of dust and gas that became our Sun and the rest of the planets. But Jupiter was the first-born of our planetary family. As the first planet, Jupiter’s massive gravitational field likely shaped the rest of the entire solar system. Jupiter could’ve played a role in where all the planets aligned in their orbits around the Sun…or didn’t as the asteroid belt is a vast region which could’ve been occupied by another planet were it not for Jupiter’s gravity.  Gas giants like Jupiter can also hurl entire planets out of their solar systems, or themselves spiral into their stars. Saturn’s formation several million years later probably spared Jupiter this fate. Jupiter may also act as a “comet catcher.” Comets and asteroids which could otherwise fall toward the inner solar system and strike the rocky worlds like Earth are captured by Jupiter’s gravitational field instead and ultimately plunge into Jupiter’s clouds. But at other times in Earth’s history, Jupiter may have had the opposite effect, hurling asteroids in our direction – typically a bad thing but may have also resulted in water-rich rocks coming to Earth that led to the blue planet we know of today.

Jupiter is a window into our own solar system’s past – a past literally enshrouded beneath Jupiter’s clouds which is why Juno, the probe currently orbiting Jupiter, is so named. Juno, Jupiter’s wife in mythology, was able to peer through a cloak of clouds Jupiter used to hide himself and his wrongful deeds. In this case, however, we are looking through Jupiter’s clouds into our own history. Juno entered orbit of Jupiter July 5th, 2016 after travelling for nearly five years to reach the gas giant. Falling into Jupiter’s gravity well, Juno arrived at a speed of 210,000 km/h, one of the fastest speed records set by any human-made object.

Juno is in a highly eccentric 53 day orbit. During Perijove, or the closest orbital approach, Juno skims Jupiter at an altitude of 4,200 km and then sweeps outward to 8.1 million. Juno’s orbit is designed to navigate through weaker areas of Jupiter’s incredibly powerful magnetic field. Second in power only to the Sun itself, Jupiter’s magnetic field accelerates high energy particles from the Sun creating powerful bands of radiation that encircle the planet – electronics-frying radiation. In addition to its nimble navigation, Juno’s electronics are hardened against radiation with its “radiation vault” – a 1cm thick titanium shell that houses its sensitive scientific equipment. One piece of equipment which dazzles all of us back on Earth is JunoCam – an RGB colour camera taking visual images of Jupiter’s clouds as the probe buzzes the planet in just two hours each orbit spending as little time as possible in Jupiter’s radiation. Most recently, Juno completed Perijove 29 and some of the photos were posted by “Software Engineer, planetary and climate data wrangler, and science data visualization artist” Kevin Gill. Kevin has an absolutely astonishing Flickr page where he posts images he’s processed from Juno as well as other missions like Saturn’s Cassini and the HiRISE camera orbiting Mars on the Mars Reconnaissance Orbiter.

Okay. And finally, why you came here: Behold Juno’s Perijove 29 processed by Kevin Gill (You can click each image to see their full size). 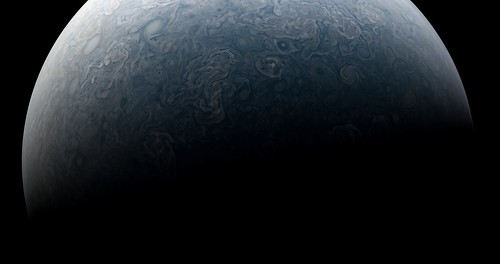 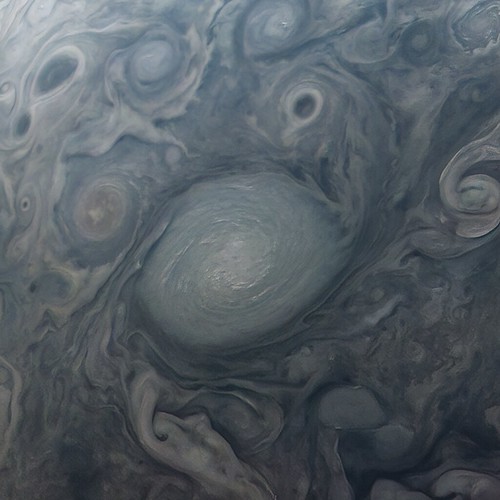 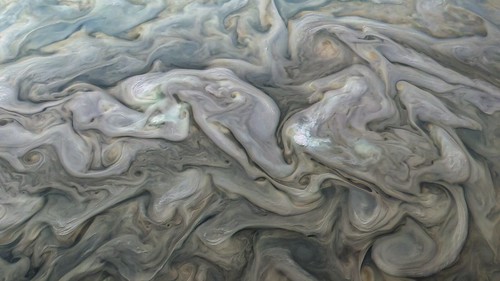 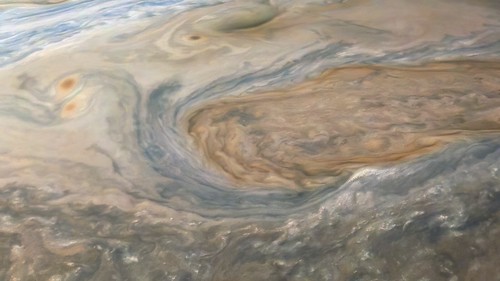 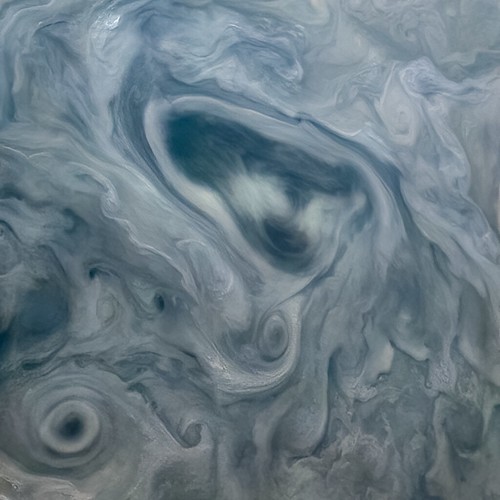 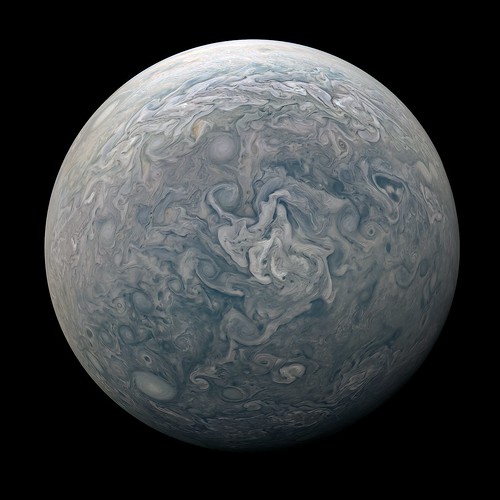 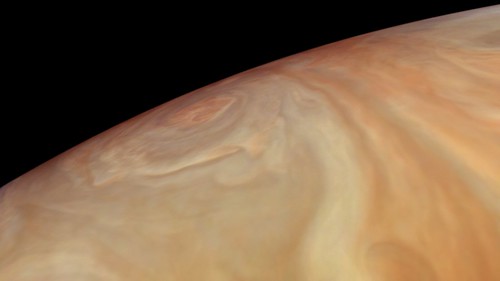 JunoCam isn’t really part of Juno’s primary scientific mission. But the camera does provide a key function – allowing Juno to bring us along for the journey. Which I think is truly spectacular. Sometimes astrophotography is thought more of as art than science. But as an astrophotographer myself, I believe these images inspire future scientists, general awareness of ongoing scientific missions, and hopefully public support for the funding of science. Speaking of which, what has our science discovered about our giantest of giant worlds?

One of the greatest mysteries of Jupiter is what lies at its heart. Juno helped settle an ongoing debate in the planetary science community about how Jupiter formed. There were two possibilities: The first is that Jupiter began as a rocky world – a core about 10 times the mass of Earth. The gravity of this core drew in surrounding hydrogen and helium until the Jupiter we know of was formed – that original rocky world buried beneath the churning maelstrom. The second possibility is that eddies in the rotating protoplanetary disk of our early solar system collapsed on themselves and Jupiter formed from them directly with no rocky core. Both theories describe different conditions at the start of our solar system. Juno revealed something stranger, not a solid core, but a “fuzzy” or “diluted” core. It appears that Jupiter did form from a rocky body, but rather than that core being situated at the centre of the planet, its is spread throughout the interior of Jupiter. The core’s dilution is likely the result of a massive planet-sized impact with Jupiter that shattered the initial core and spread it through half of Jupiter’s diameter. Imagine being present for an event like that – Jupiter swallowing a would-be planet in our solar system we’ve never known. History of our place in space revealed. We’ve also learned that Jupiter’s winds dive deep below the outer clouds, that the Great Red Spot is hundreds of kilometers deep, and we’ve seen giant cyclones at Jupiter’s North and South Poles that could swallow a country. Jupiter is presently the brightest object in the night sky after sunset. If you have clear skies and can see it, look South! Remember, that bright point is a giant world hundreds the times the size of Earth, millions of kilometers away, and yet potentially one of the key factors in your existence. By Jove, that’s amazing.

Does Jupiter Have a Solid Core? – Universe Today

What has the Juno Mission Taught us About Jupiter – Astronomy

A Chain Of Results – Watts Up With That?

Woolly mammoths might have lived 1000’s of years after supposed extinction – Watts Up With That?

Late wet season reliably predicts drought in areas liable to meals insecurity – Watts Up With That?

Tech Jackie Lilly - January 21, 2021
0
This article is part of the On Tech newsletter. You can sign up here to receive it weekdays.We’ve seen the internet magnify the best...

Tech Jackie Lilly - January 21, 2021
0
Roemie Hillenaar and Anca Stefan, the co-founders of Creative Fabrica Creative Fabrica is best known as a marketplace for digital files, like fonts, graphics and...

How you can Create Profitable Media Messages in Three Simple Steps