Astronauts and cosmonauts in space have reported spatial disorientation problems, where they find it hard to get a sense of direction, or distinguish between what might be considered “up” or “down.”  This is called “Visual Reorientation Illusions” (VRIs) where the spacecraft floors, walls and ceiling surfaces can suddenly exchange subjective identities.

An extreme example of this came when one shuttle astronaut reported feeling like the room was rotating around him when he opened his eyes one morning. Other astronauts have reported briefly not knowing where they were during a spacewalk.

NASA astronaut Bob Behnken during a spacewalk at the International Space Station on June 26, 2020. Credit: NASA.

On Earth we usually know which way is up because the body’s vestibular system keeps our brains informed. Sensors in the inner ear sense the pull of gravity and they signal the brain with information about our body’s orientation.

However, in a new study, researchers at York University’s Centre for Vision Research found that an individual’s interpretation of the direction of gravity can be altered by how their brain responds to visual information. Therefore, what feels like “up” may actually be some other direction depending on how our brains process our orientation.

The researchers found that people differ in how much they are influenced by their visual environment. They say this finding can help in understanding how individuals use visual information to interpret their environment and how they respond when performing other tasks.

“These findings may also help us to better understand and predict why astronauts may misestimate how far they have moved in a given situation, especially in the microgravity of space,” said professor Laurence Harris, the lead author of the study.

For this study, the researchers had participants use virtual reality headsets and then lie down in a virtual environment that was tilted so that the visual “up” was above their head and not aligned with gravity. The researchers varied the strength of visual orientation cues, using an oriented corridor and a starfield while also varying head-on-trunk orientation and body posture.

All participants saw the same scenes and physical orientation cues, but their reactions were different. In the study, the researchers found the participants could be divided into two groups: one group who perceived they were standing up vertically (aligned with the visual scene) even though they were actually lying down, and a second group who maintained a more realistic idea of their lying position. 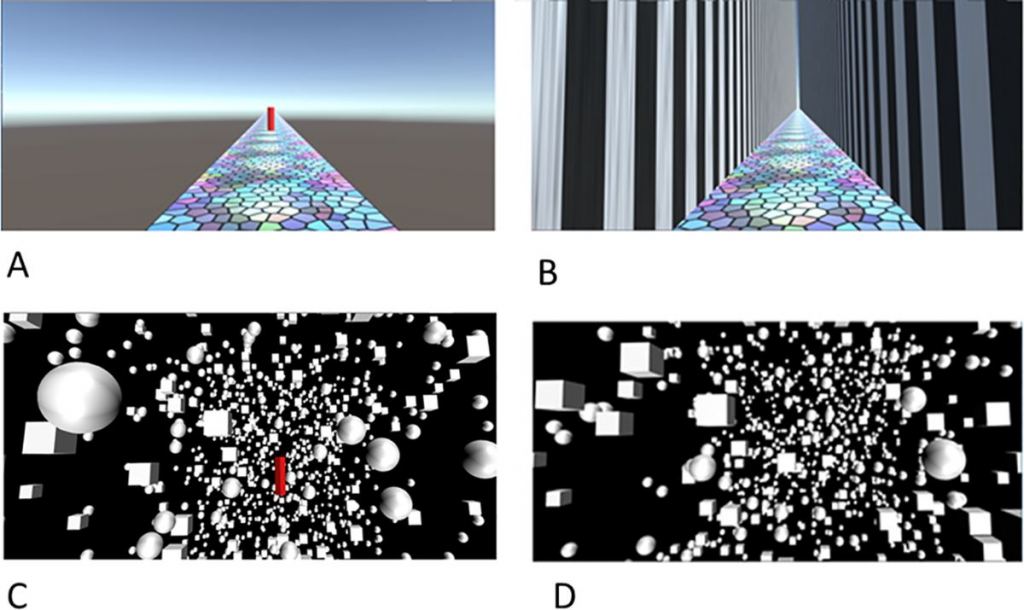 A view of the visual cues used in VR headsets for this research. Credit: Harris et al./ York University.

“Not only did the VRI-vulnerable group rely more on vision to tell them how they were oriented, but they also found visual motion to be more powerful in evoking the sensation of moving through the scene,” said Harris.

In space, astronauts rely on certain tricks or procedures to establish a common sense of direction. On board the International Space Station, all of the modules have a consistent “up” orientation, where the writing on the walls point in the same direction, and computers are oriented to match the same direction.

Gaining a sense of orientation also helps when people first arrive in space to not only get their bearings but it helps stave off “space sickness” — where the inner ear confusion of what is up and down can result in symptoms ranging from mild headaches to vertigo and nausea. Which astronauts will get space sickness and which ones don’t has been hard to predict.  Some astronauts who show an exceptional tolerance to motion sickness when flying jets suffer the worst symptoms upon arriving in space.

Similarly, Harris and graduate student Meaghan McManus also found it hard to predict which participants of their study would experience the most disorientation.  But they found that, fortunately, the brain quickly adapts, and it learns to trust the eyes and reprograms signals from the vestibular system to reconcile the mismatch. Once a person learned to rely that visual cues are the most reliable for determining their position, the quicker they were able to correctly orientate themselves.

“The findings reported in this paper could be helpful when we land people on the Moon again,” said Harris, “or on Mars, or comets or asteroids, as low-gravity environments might lead some people to interpret their self-motion differently – with potentially catastrophic results.”