Out in the asteroid belt, 334 million km from Earth, a small spaceship landed briefly on the surface of the asteroid Bennu today and tried to collect dust and rock samples. NASA's OSIRIS-REx spacecraft (Origin, Spectral Interpretation, Resource Identification, Security, Regolith Explorer) spent about 10 seconds with the ancient asteroid collecting samples that are expected to return to Earth in 2023. While mission scientists and engineers are required to confirm these samples from the asteroid, preliminary data was collected showing that every step of the procedure went as planned.

“That was transcendent. I can't believe we actually did it, ”Mission Leader Dante Lauretta said during a livestream from the Lockheed Martin Mission Support Room in Denver, Colorado. “The spaceship did everything it was supposed to do. While we still have some work to do to determine the outcome of the event, it was a great achievement for the team. I look forward to analyzing the data to determine the mass of the samples collected. "

Since Bennu is so far from Earth, there was a delay of 18.5 minutes before the signal from the spaceship reached Earth. A member of the team identified the milestones achieved in receiving the signal. The entire touchdown and collection sequence was autonomous, with software on board with which OSIRIS-REx could safely navigate to the surface, enable collection and then burn back to move the spaceship away from the surface of the asteroid.

The entire event, from burning the deorbit to taking samples, lasted around four and a half hours.

A diagram showing the sampling maneuver of OSIRIS-REx. The maneuver is now planned for October 20, 2020. Photo credit: NASA / GSFC / UA

"It will be four and a half hours of fear," said Beth Buck, OSIRIS-REx mission operations manager at Lockheed Martin Space, at a press conference Monday, comparing the descent of this spacecraft to the "seven minutes of terror" of a spacecraft landing on Mars.

OSIRIS-Rex landed in a vacant spot in a crater on Bennu's northern hemisphere about the size of a small parking lot. The place called Nightingale is one of the few relatively clear spots on this unexpectedly boulder-covered space rock. 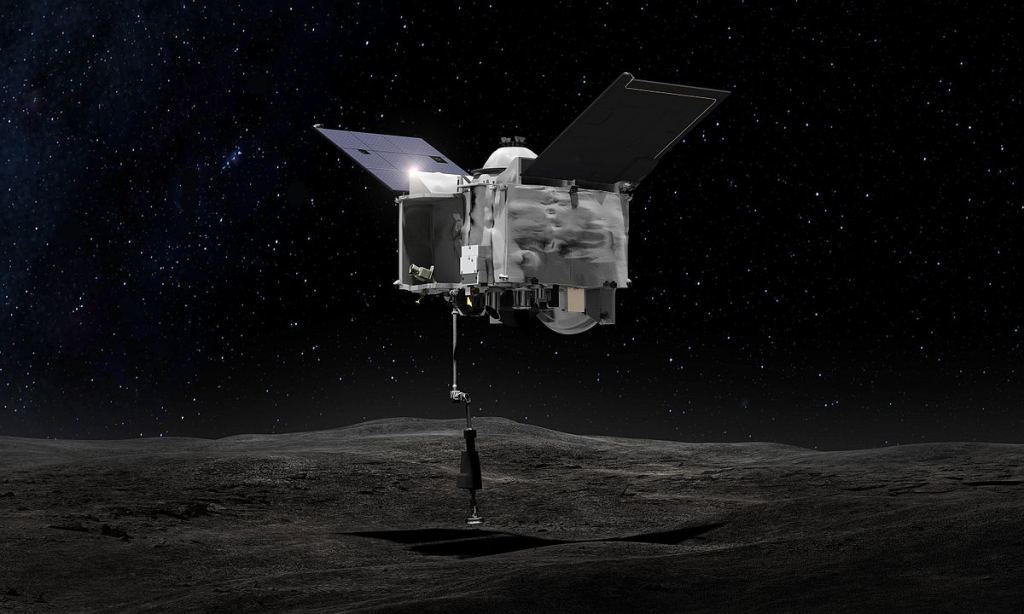 An artist's concept for OSIRIS-REx to receive a sample of the asteroid Bennu for return to Earth. Photo credit: NASA / GSFC / UofArizona

Real-time data showed that the spacecraft's sampling arm, known as the Touch-and-Go Sampling Mechanism (TAGSAM), successfully made contact with the surface and triggered a nitrogen gas surge. The gas should have kicked up dust and pebbles on Bennu's surface, some of which should have been collected in the TAGSAM sample collection head. OSIRIS-REx engineers also confirmed that shortly after contacting the surface, the spacecraft fired its engines and safely retreated from Bennu.

The science team wants to collect at least 60 grams of regolith. The sample container can hold up to 2 kg.

OSIRIS-REx engineers and scientists will use various techniques to remotely identify and measure the sample. It first compares images from the Nightingale site before and after the TAG to see how much surface material moved in response to the gas surge.

"Our first indication of whether we have succeeded in collecting a sample will be on October 21, when we link the back-away film downwards from the spaceship," said Michael Moreau, OSIRIS-REx deputy project manager at Goddard NASA Space Flight Center. "If TAG disrupted the surface significantly, we probably collected a lot of material."

Next, the team will try to determine the amount of sample collected. One method is to take pictures of the TAGSAM head with a camera called a SamCam, which documents the process of sampling and determines whether dust and stones have entered the collection head. An indirect indication is the amount of dust that is around the sample collection head. OSIRIS-REx engineers will also attempt to capture photos that, in the right lighting conditions, could show the inside of the head so the engineers can look for evidence of a pattern inside. The nightingale crater on Bennu with the relative size of the OSIRIS-REx spacecraft. Image: NASA

"We will use the combination of data from the TAG and post-TAG images and the mass measurement to assess our confidence that we have collected at least 60 grams of sample," said Rich Burns, OSIRIS-REx project manager at Goddard. "If our confidence is high, we will make the decision to stow the sample on October 30."

To store the sample, engineers command the robotic arm to place the sample collection head in the sample return capsule (SRC) in the body of the spacecraft. The rehearsal arm will then be retracted to the side of the spacecraft for the last time, the SRC will be closed, and the spacecraft will prepare for its departure from Bennu in March 2021 – this will be the next time Bennu is well aligned with Earth for the year of most economical Return flight. The asteroid Bennu, as it was imaged by OSIRIS-REx from a distance of about 80 km. Photo credit: NASA / University of Arizona

"That was an incredible feat – and today we have advanced both science and technology and our prospects for future missions to investigate these mysterious ancient storytellers of the solar system," said Thomas Zurbuchen, assistant administrator of NASA's directorate for scientific missions at the agency's headquarters in Washington. "A piece of bedrock that has seen the entire history of our solar system can now come home for generations of scientific discovery, and we can't wait to see what's next."