The venerable Hubble Space Telescope has given us another gorgeous picture of Jupiter and its moon Europa. The incredibly sharp image was captured on August 25th, and shows some of the stunning detail in Jupiter’s stormy atmosphere. Hidden in all that stormy activity is something new: a bright white storm plume travelling at about 560 km/h (350 mp/h).

Jupiter was 653 million km (406 million mi) away from Earth when the image was taken. The image is part of OPAL, the Outer Planet Atmospheres Legacy program. Each year, Hubble images the entire planet to watch for changes in the atmosphere and in the storm activity.

The Great Red Spot (GRS) is prominent in this image, just as it’s been prominent in every image of Jupiter for about 200 years. A storm was seen on Jupiter prior to that, but scientists aren’t certain it was the same storm. If it was, then the GRS has been around even longer.

The GRS isn’t always this red. Its color shifts over time. At 15,800 km (9800 mi) across it’s big enough to swallow Earth, though the spot is shrinking, and has been for a while. But astronomers say that the rate of shrinkage is slowing, though they have no real understanding of why.

The GRS travels counterclockwise, and it’s slamming into other cloud features in front of it, leaving a swirling trail of eddies and white and beige clumps.

The GRS has a neighbour: the Oval BA, or Red Spot Junior. It’s just below the GRS. Currently, Junior is fading to its original white-beige color, after turning red in 2006. Astronomers aren’t certain why the spots appear red sometimes. Lab experiments showed that interactions between the Sun’s ultraviolet light and atmospheric chemicals in the upper atmosphere produce reddish-brown tholins. This 2006 Hubble image shows how red the Junior spot was. Image Credit: NASA, ESA, A. Simon-Miller (NASA/GSFC), and I. de Pater (University of California Berkeley)

The changes that the GRS and Red Spot Junior are undergoing are not new. But they’re of great interest to scientists, and they pose challengin questions that for now at least are unanswered.

What is new is the bright white storm feature in the mid-northern latitudes. This single storm plume appeared on August 18th, 2020, and is moving at 560 kp/h (348 mp/h). Another plume has formed too, since the image was taken. This white storm plume formed on Jupiter on August 18th, 2020. Since then, another has appeared. Image Credit: NASA, ESA, A. Simon (Goddard Space Flight Center), and M. H. Wong (University of California, Berkeley) and the OPAL team.

In a press release, the Hubble team says that these storms aren’t uncommon. Sometimes several of them appear at once. But they say that this particular white plume has more structure than predecessor plumes. There are small, dark clumps rotating counter-clockwise behind this plume, which haven’t been seen in the past. There’s speculation that this could be the beginning of another huge spot, similar to the GRS. The OPAL image of Jupiter also caught its moon Europa. It’s believed that Europa harbors an ocean under its frozen surface. Both NASA and the ESA are planning missions to explore Europa. Credit: NASA, ESA, A. Simon (Goddard Space Flight Center), and M. H. Wong (University of California, Berkeley) and the OPAL team.

The new Hubble image also shows a single one of the Galilean moons: Europa. Researchers believe that Europa harbours an ocean under its icy surface, and in 2013 the Hubble spotted water vapour in plume(s) coming from the moon’s south pole. The Hubble has been imaging the entirety of Jupiter as part of OPAL since 2014. The images it takes are flattened into rectangles for easier study. Though these archived images are impressive scientifically, they’re kind of underwhelming for the rest of us. One of the archives Hubble images of Jupiter as part of the OPAL program. Image Credit: “This work used data acquired from the NASA/ESA HST Space Telescope, associated with OPAL program (PI: Simon, GO13937), and archived by the Space Telescope Science Institute, which is operated by the Association of Universities for Research in Astronomy, Inc., under NASA contract NAS 5-26555. All maps are available at http://dx.doi.org/10.17909/T9G593.”

The Hubble also captured images of Jupiter in wavelengths other than visible light. This image is a combination of ultraviolet light, visible light, and near-infrared. The panchromatic view of Jupiter is helping astronomers gain new insights into the planet’s atmosphere, The image “offers insights into the altitude and distribution of the planet’s haze and particles,” according to the press release. 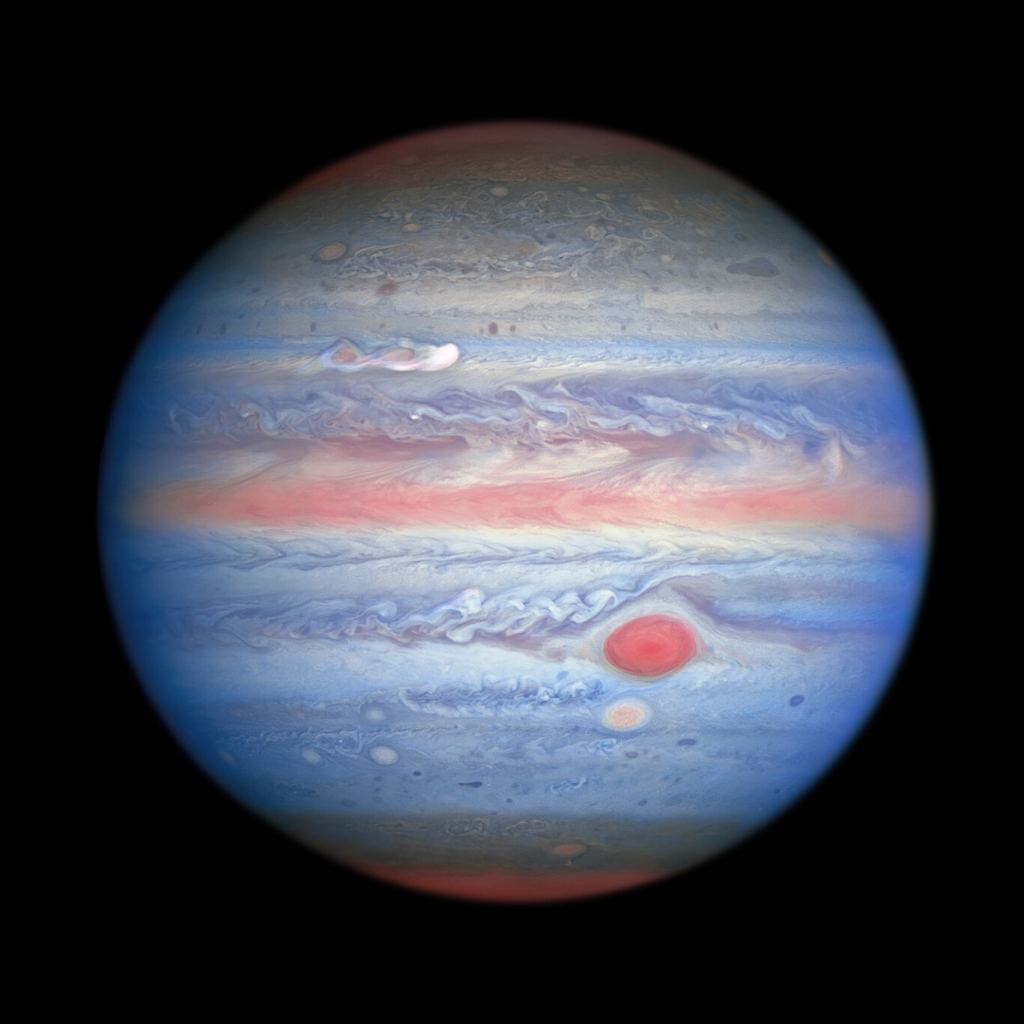 Higher altitude regions appear red in this multispectral image, especially noticeable over the poles. The blue regions represent ultraviolet light being reflected off of the gas giant.

Hubble is not the only mission keeping an eye on the gas giant. NASA’s Juno mission arrived at Jupiter on July 5th, 2016. Along with its impressive array of advanced science instruments, it carries JunoCam. JunoCam is a high-resolution camera put on the spacecraft just for us. And NASA makes the raw images available for anyone to process and present. The above image shows what looks like two white storms merging into one. The merger is just more evidence of Jupiter’s unpredictable, dynamic atmosphere. The larger of the two merging ovals has grown through mergers with other storms, and astronomers have watched it all happen. The above image was processed and presented by amateur astrophotographer Tanya Oleksuik. (Check out her website: Oh the Silence.)

In a press release, the Hubble team writes that the merger may be caused by “perturbations due to the proximity of Oval BA

By mass, Jupiter is about 75% hydrogen and 24% helium. Other elements make up the remaining 1%. Those proportions are very close to the theoretical proportions of the solar nebula from which our Solar System formed. Jupiter is sometimes described as a “failed star,” but astronomers say that’s incorrect.

Acidification impedes shell improvement of plankton off the US West Coast – Watts Up With That?

New Drones for Exploring Mars are Getting Examined in Iceland