Using the Atacama Large Millimeter/submillimeter Array (ALMA), a team of scientists has identified a mysterious molecule in Titan’s atmosphere. It’s called cyclopropenylidene (C3H2), a simple carbon-based compound that has never been seen in an atmosphere before. According to the team’s study published in The Astronomical Journal, this molecule could be a precursor to more complex compounds that could indicate possible life on Titan.

Similarly, Dr. Catherine Neish of the University of Western Ontario’s Institute for Earth and Space Exploration (Western Space) and her colleagues in the European Space Agency (ESA) found that Titan has other chemicals that could be the ingredients for exotic life forms. In their study, which appeared in Astronomy & Astrophysics, they present Cassini mission data that revealed the composition of impact craters on Titan’s surface.

The international team responsible for the discovery of cyclopropenylidene was made up of researchers from NASA’s Solar System Exploration Division (SSED), the Universities Space Research Association (USRA), Institute of Astronomy and Astrophysics in Taipei, and multiple universities. They were led by Conor Nixon and Dr. Alexander Thelen, a planetary scientist and postdoctoral fellow at the NASA Goddard Space Flight Center (respectively).

The team used the ALMA observatory to study Titan in 2016. While sifting through the light signatures ALMA collected, they noticed spectra that indicated a strange chemical fingerprint. After searching through a database of all known molecular light signatures, Nixon identified it as cyclopropenylidene (C3H2). Said Nixon in a NASA press release:

“When I realized I was looking at cyclopropenylidene, my first thought was, ‘Well, this is really unexpected. Titan is unique in our solar system. It has proved to be a treasure trove of new molecules.”

In the past, scientists have detected C3H2 in various pockets throughout the galaxy, but only in clouds of gas and dust in the interstellar medium (ISM). In these regions, conditions are too cold and diffuse to facilitate chemical reactions. In any other environment, cyclopropenylidene easily reacts with other molecules to form different chemical compounds.

However, Nixon and his colleagues were able to detect small amounts of cyclopropenylidene around Titan because they were examining the upper layers of the moon’s atmosphere, where there are fewer other gases for C3H2 to interact with. Why this is possible for Saturn’s largest moon and no other bodies in the Solar System remains a mystery. But what it portends could be even more significant. 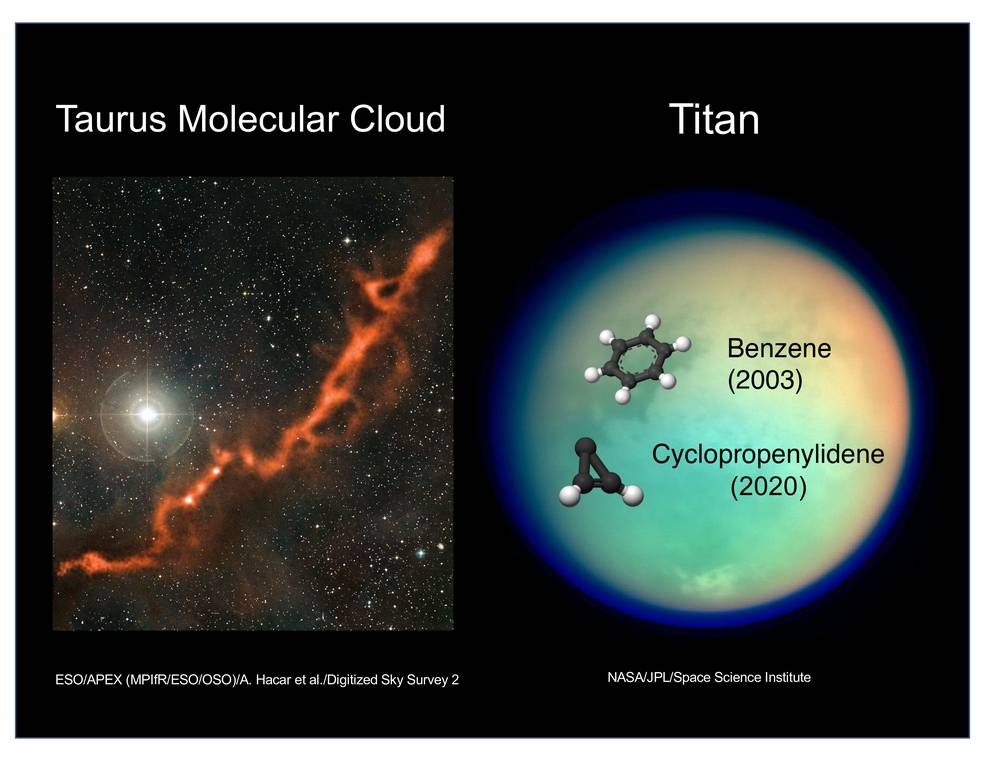 Until now, cyclopropenylidene discoveries have been confined to pockets of gas and dust in interstellar space. Credits: Conor Nixon/NASA’s Goddard Space Flight Center

Although C3H2 is not associated with modern-day biological reactions here on Earth, it is an example of what are known as “closed-loop molecules,” which are important because they form the backbone rings for the nucleobases of DNA and RNA – two compounds that are the very building blocks of life as we know it.

Michael Malaska, who once worked in the pharmaceutical industry, decided to change carreers and became a JPL planetary scientist so he could study objects like Titan. As he explained, finding molecules like C3H2 is essential to establishing seeing the big picture of Titan:

“It’s a very weird little molecule, so it’s not going be the kind you learn about in high school chemistry or even undergraduate chemistry. Down here on Earth, it’s not going be something you’re going to encounter… Every little piece and part you can discover can help you put together the huge puzzle of all the things going on there.”

Another closed-loop molecule that has been detected in Titan’s atmosphere is benzene (C6H6). Until now, benzene was thought to be the smallest unit of ringed hydrocarbon molecules that could exist in an atmosphere – but that status clearly goes to cyclopropenylidene. What’s more, the cyclic nature of both molecules presents researchers with an extra branch of chemistry that may allow for the formation of DNA and RNA.

In any case, the role these compounds play is sure to be something that the upcoming Dragonfly mission could investigate. This mission is scheduled to launch in 2027, and consists of a rotorcraft lander drone that will explore Titan’s atmosphere and surface to learn more about its rich prebiotic environment and organic chemistry. Among other things, this mission is tasked with answering whether or not Titan could actually support life on its surface and within its methane lakes.

This has been a point of speculation and curiosity for decades, ever since the Voyager 1 and 2 space probes flew through the Saturn system in 1980 and 1981, respectively. When the Cassini-Huygens mission arrived around Saturn in 2004, what it observed only intrigued scientists further. What these missions found was that despite being very cold, Titan was distinctly Earth-like in some ways.

For starters, it has a dense atmosphere (four times as dense as Earth’s) that’s predominantly composed of nitrogen. No other planet or moon in the Solar System can make that claim! Plus, it has a methane cycle that is very similar to Earth’s water cycle, complete with lakes and rivers on the surface, evaporation, clouds, and precipitation. There’s even evidence that it may have a subsurface ocean of salty water.

But most interesting of all is the organic processes at work, where methane and other hydrocarbons in Titan’s atmosphere interact with solar radiation, break down, and release a web of organic chemistry that could result in prebiotic surface conditions. This is what has thrust Titan to the top of the list of potential destinations for NASA missions that are looking for past and present life in the Solar System. This artist’s concept of a lake at the north pole of Saturn’s moon Titan illustrates raised rims and rampart-like features such as those seen by NASA’s Cassini spacecraft around the moon’s Winnipeg Lacus. Credit: NASA/JPL-Caltech

“We’re trying to figure out if Titan is habitable. So we want to know what compounds from the atmosphere get to the surface, and then, whether that material can get through the ice crust to the ocean below, because we think the ocean is where the habitable conditions are.”

Another point of interest, which makes Titan such a temping target for research, is the possibility that the molecules that could be sitting on Titan’s surface might be the same as the ones that formed the building blocks of life on Earth. Roughly 3.8 billion to 2.5 billion years ago (during the Achean Eon), Earth was a much different place, where the atmosphere was composed predominantly of nitrogen, CO2, methane, and water vapor.

Basically, the conditions on Earth during this period are believed to have been similar to those on Titan today. Melissa Trainer, a NASA Goddard astrobiologist, is the deputy principal investigator of the Dragonfly mission and the lead investigator of a key instrument it will use to analyze the composition of Titan’s surface. As she indicated:

“We think of Titan as a real-life laboratory where we can see similar chemistry to that of ancient Earth when life was taking hold here. We’ll be looking for bigger molecules than C3H2, but we need to know what’s happening in the atmosphere to understand the chemical reactions that lead complex organic molecules to form and rain down to the surface.”

Artist’s impression of the Dragonfly mission on the surface of Titan. Credit: JHUAPL

In a similar vein, assistant professor Catherine Neish and her colleagues at the ESA also found something very interesting when studying the surface of Titan. Ordinarily, atmospheric processes bury Titan’s surface ice beneath a thick layer of organic material, especially around the moon’s dry equatorial. This material behaves exactly like sand and leads to dust storms and dune formations when high winds occur.

Luckily, there are places where the surface ice can peek through and scientists can study it and learn more about its composition. The higher latitudes on Titan, for example, are subject to more precipitation, leading to surface streams that erode the sand away. Beyond that, there are impact craters created by objects hitting the surface, which expose relatively fresh ice within Titan’s crust. As Neish explained:

“It’s wild. There’s no other place like Titan in the solar system. There’s more sand on Titan per area than anywhere else. And Titan has weather. It’s not unlike the Earth in that way. It’s just that the ingredients are all wrong. It has methane rain and streams cutting through the surface and organic sand getting blown around. It’s still very active just like it is here on Earth.”

Unfortunately, getting a good look at the surface is difficult because of Titan’s dense atmosphere. But after examining data obtained by Cassini‘s Visible and Infrared Mapping Spectrometer (VIMS), Neish and her colleagues were able to get a clear look at three impact craters in Titan’s equatorial region and its mid-latitude region. What they found was that the equatorial craters of Selk, Ksa, Guabonito, and the crater in Santorini Facula appeared to be purely composed of dark organic material. The mid-latitude craters of Afekan, Soi, Forseti, Menrva, and Sinlap were found to be enriched with water ice and organic material. They were also able to determine that none of the ice they observed was ammonia (NH3) or frozen CO2 (aka. “dry ice”).

This is consistent with models of Titan that show it to be a dynamic environment with active processes shaping its surface. The combination of water and organics could also mean there are ancient ecosystems frozen at the bottom of impact craters. As part of the science and engineering team overseeing this mission, Neish’s findings here could inform the upcoming Dragonfly mission and where it should look for possible evidence of life.

It also illustrates how the search for possible life beyond Earth is slowly shifting beyond Mars to include locations in the outer Solar System. Said Neish:

“I think more and more, we’re seeing a false equivalency between life and Mars. The recent findings about Venus and all the new things we’re learning about it once being an ocean world is another game-changer. Finally, people are saying, in our search for life in the universe, we really need to focus on a lot more places, and not just Mars. And that includes NASA sending the Dragonfly mission to Titan.”

The next few decades promising to be a very exciting time for space exploration (and fans thereof!). Beyond returning to the Moon, establishing a sustained presence there, and sending the first crewed missions to Mars, we will also be sending our robotic explorers to investigate Europa, Ganymede, and Titan in the hopes of finding life there.

In so doing, we will finally be able to shed light on how life began in our Solar System, and maybe how and where it could exist throughout the Universe!

Some Texas coastal fisheries devastated by 2021 freeze, nevertheless it’s nothing new – Watts Up With That?

Broaden your expertise capabilities for an (more and more) hybrid future

ESA is Engaged on a Mission to Discover Caves on the...