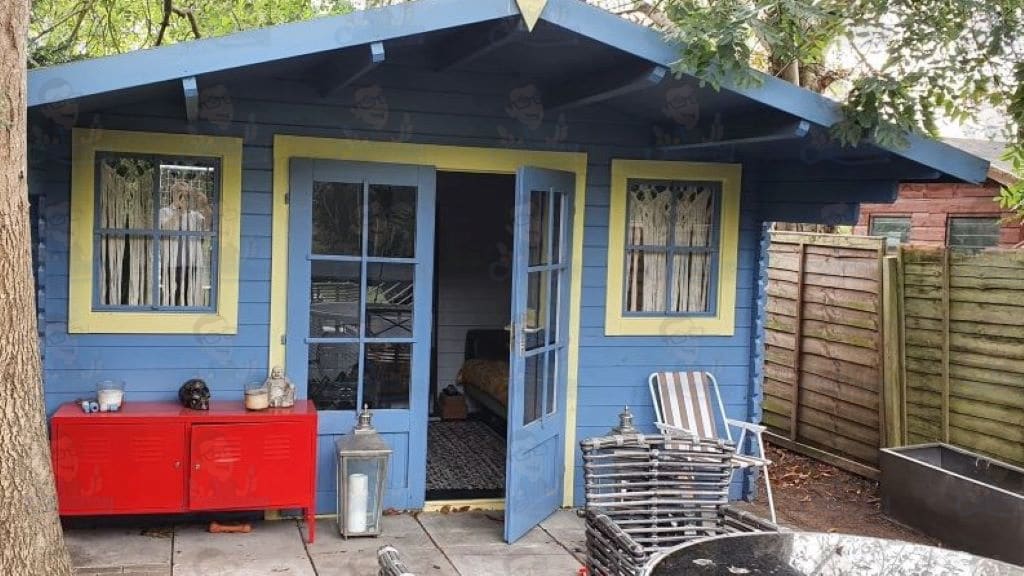 WIFI and Internet Connectivity in Outbuildings

If you have an outbuilding that you use as an office or just a place where you’d like to connect to the internet. This blog is dedicated to you. In this post, I’ll clarify how to link your shed, outbuilding, or “man cave” to the internet. There are many ways to Install Internet In Your Outdoor Building. Here are the ways you may want to try or situations you may find yourself in while achieving Internet in your outbuilding.

WIFI / Internet Connection From The House To The Outbuilding

Having amazing Wifi in your Outside Building or Area can be achieved using either a wired or wireless link.

Installing a physical Ethernet cable between your main building and outbuildings, sheds, and other structures is the way I will suggest because it will have the most secure link and internet speed. To do this, attach a cable to one of your router’s Ethernet ports on the back and then to your outbuilding. For this job, you can either buy a pre-terminated long cable or buy your Cat5/6 cable and terminate the RJ45 plugs yourself. The latter is a little more difficult and takes some experience, but the cable can be cut to the exact length you need, eliminating any guesswork. Furthermore, since the cable without the RJ45 plugs attached can be fed through much smaller holes in your wall, it will be much easier to the route. If the RJ45/ 8P8C plugs are too difficult to install, you can terminate the cable with RJ45 data ports on both ends, which is close to terminating the phone cable. You may install a network switch for wired internet connections for multiple devices and/or a wireless access point for WIFI coverage once the cable between the two buildings has been installed.

If you want a Trusted Hertfordshire Telecommunications Contractor to run Hard Data Cabling to your Outdoor Building for you, contact Cabledan. Cabledan has been in business for over 25 years. Based in Watford, we serve Hertfordshire, London, and the Surrounding Home Counites in the United Kingdom. Give us a call or go to our website. Here is our contact information.

To Link, The Internet To The Outbuilding Use A Cable

When it comes to running cable to a detached structure on your house, there are a few choices. The cable you choose is determined by where it will be installed, the speed needed at the other end, and how soon it will be installed. If the cable is going to be surface run outside, such as along a fence or on a wall, or if it has any exposed bits, you’ll need to buy a data or Ethernet cable that is designed for outdoor use and is UV secure. If you don’t do this, the cable can become fragile and break apart when exposed to sunlight. When this occurs, rainwater generally reaches it easily, resulting in a waterlogged cable. The cable stops working the next thing you know.

You’ll also want to get some screened (FTP) cable if you’re going to run the data cable to your outbuilding near electrical cables. This is particularly true for longer distances. The cable’s internal screen will help prevent interference from accessing the cable and ensuring that it operates as effectively as possible.

Cat6a – A step forward Category 6 cable is a form of data cable. Cat6 speeds can be delivered over longer distances.

Fibre optic cabling is difficult to terminate and requires costly fusion splice equipment, although pre-terminated cables are available. If your outbuilding is very far away, a cable with kilometer-long serving distances will support the highest speeds and be the most future-proof. 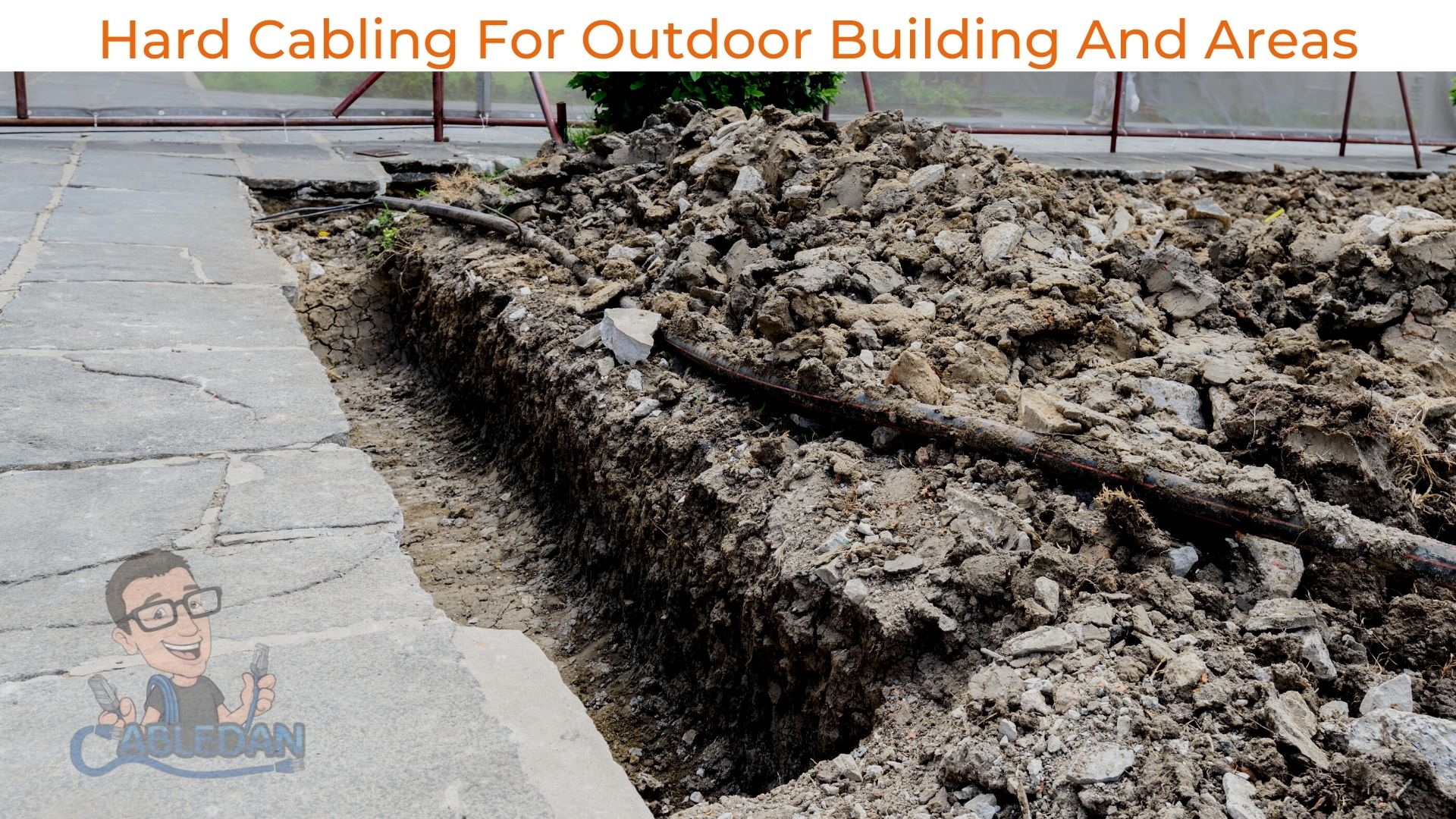 The cable itself can be routed in a few different ways. Here are a few examples:

If you have a wall or fence, you can simply clip the cable to it to access your outbuilding (remember to use external grade data cable)

Catenary Wire – Between your main house, where the internet is, and your outbuilding, where the cable needs to go, an overhead catenary wire may be placed. The cable can then be cable connected to this until it’s up. (Again, make sure you’re using an external-grade cable.)

Buried Underground – This approach takes the most elbow grease. Dig a trench and lay the cable in it, then cover it with the earth/ soil you dug up. While direct burial cables are available, I recommend routing the cable through a conduit first and then burying it. When the cable is buried, this will cover it. You might also want to run a spare cable or a pull wire to aid in the pulling of cables at a later time.

WIFI & Wireless To the Shed/Outbuilding

If routing a cable isn’t your thing, it might seem like too much effort. Isn’t worth it because the outbuilding is either too close or too far away. In either case, there are other ways to do this using wireless technology. Just so you know, wireless doesn’t always imply that no wires are needed. It simply means that radio waves will be used to link your house/main building to your external building (wireless).

If that fails, a WIFI range extender might be able to help repeat the current WIFI so that it reaches the outbuilding. This can be hit or miss, and they need to be strategically located such that the WIFI extender is positioned in a location where the WIFI from your broadband router is still powerful enough, as well as a location where it can help extend the WIFI to the outbuilding.

This is an alternative and more secure method of doing things. This serves as a backup wireless network that can be built closer to your shed/outside office, for example. If you buy one that is POE compatible (Power Over Ethernet), you can use the same data cable to connect to the internet and power the access point. If you buy an outdoor access point, you can use it to connect both your outbuilding and your garden to the internet.

The connection between Two Points

Two separate antennas are mounted outside, typically with the line of sight oriented towards each other, to form a point-to-point link. When using a point-to-point link to provide internet to an outbuilding, you’d run a cable from your internet hub or LAN to one antenna on the exterior of your main building and another on the exterior of your secondary building, with data cable entering that building. Normally, both pieces of equipment will be POE compatible. A point-to-point link can be set up to span vast distances of kilometers, saving a lot of time and effort as opposed to having to mount a cable and reaching high speeds like 10Gb. Since the latter’s equipment is too costly, it’s only really appropriate for massive networks, such as those used in schools or with a large number of devices linked. The Ubiquiti M5 Nanonstation is a simple point-to-point connection that is suitable for sheds, outdoor offices/gyms, and other similar applications.

Other Options For Connecting Separated Buildings To The Internet

Don’t give up if none of the above suggestions work for you. There are other ways to link your detached outbuilding to the internet and/or provide it with power. There are the following:

Power Adapters, also known as Homeplugs, are a two-part device that transmits internet data over existing power lines. You could link one of these to your internet router/hub with an Ethernet cable, and then connect another to your outbuilding with another Ethernet cable. You may attach this to your device or a wireless access point to provide WIFI from here. There is no need for an external access point in some makes/models because the WIFI function is built-in. The disadvantage, and one of the key reasons why this may not be feasible for your setup, is that Powerline adapters must be wired to the same electrical circuit or ring main, which means you won’t be able to use this system if your outbuilding/shed is on a separate circuit.

If you have a strong 3G or 4G signal near your outbuilding, you can mount a high gain directional antenna for each of these networks on the exterior of your detached house, with cable (usually coaxial) into the interior that feeds a 3G/4G wireless router. The router then accepts a sim card, just like every other smartphone, and presto, internet, and WIFI in your outbuilding. You’ll have to pay bills for the sim card, but decent offers with plenty of data can be found for £20/$20. You’ll need a rough understanding of where the closest masts are in your area when building the external 3G/ 4G aerial. I suggest doing your homework first because you’ll want to purchase a sim card that matches the cover of the telecom provider. You’ll need to point the antenna in that direction as well.

You may or may not be aware that broadband can be accessed via satellite. There are a variety of satellite broadband services available around the world, but the two most common in the United Kingdom are Tooway and SES Broadband. In the UK, however, the Tooway domestic tariffs are absolute.